“I have a 4yo TB that has thin walls and overall poor quality feet. Any help or product recommendations from Hawthorne would be appreciated.”

Kristen acquired Frankie around the end of August. She contacted us the last part of September 2016. Frankie had been in race training up until mid-June, 2016. His feet were in very poor health and he had lost three glue-on shoes in a one-month time     period. Large chunks of his hoof walls were falling off and he was almost completely lame. He was only being ridden four days a week for twenty minutes at a time, walk trot.

The farrier caring for Frankie did not want to nail his shoes due to the poor condition of his hooves. He said he had thin, weak hoof walls, but didn’t offer any help as to how to fix Frankie’s feet. 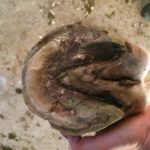 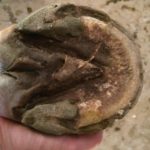 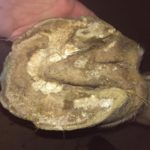 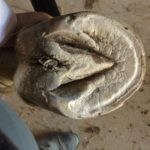 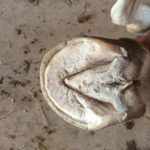 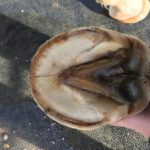 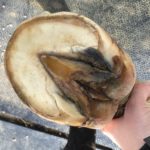 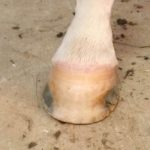 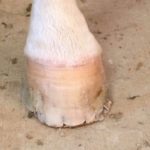 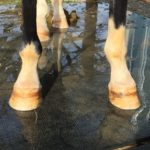 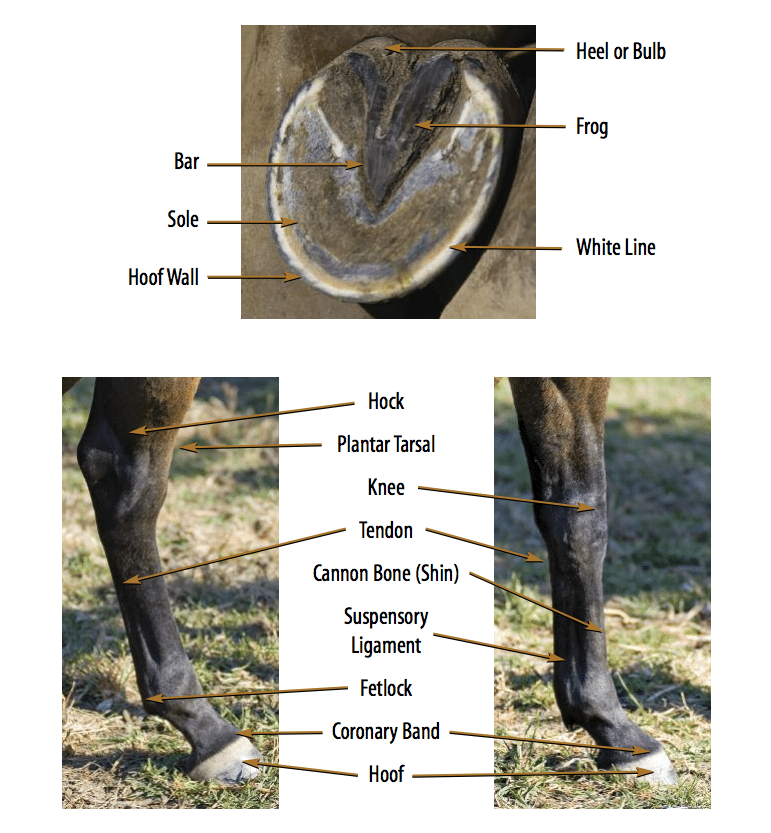 Kristen contacted us about her four-year-old thoroughbred named Frankie in September of 2016, about a month after acquiring him. Frankie had been in race training until around June of that year, and his feet were now in very poor health; he’d lost three glue-on shoes over the course of a month, and large chunks of his hoof walls were falling off, rendering him almost completely lame. It had gotten so bad that the farrier caring for Frankie told Kristen he was afraid to nail or glue on his shoes due to the poor condition of his hooves, and was at a loss for how – or if – to proceed. But she was determined.

Kristen turned to Hawthorne for help, as she’d reached a point where they were trying him barefoot and walk trotting about 15-20 minutes every other day. She wanted to know if there was anything she could do to:

She and Frankie were in luck.

We could see that Frankie was suffering from thrush, an infection of the frog of the hoof. In addition to thrush, he also appeared to be developing White Line Disease, a separation of the hoof wall. This separated area is prone to being infected by fungi and bacteria that can progress up toward the coronary band if not properly treated.

The first thing we wanted to determine was what kind of glue was used for the shoes he’d stepped out of, and if the glue company had any advice for removing the remaining residue around the rim of his foot without further damaging the hoof. Our concern was making it more difficult to treat the infected area, and there was a chance the glue was actually sealing in the infection for the time being.

Next, we wanted to get a sense of what kind of area Frankie was in. Different surfaces and environments can have different effects on feet. Kristen told us Frankie was out on grass and being worked in a sandy arena. We were somewhat concerned about the arena because sand can wear on hooves like a nail file. We wanted to minimize damage to the hoof, but didn’t think it was so dire that he needed to stop being worked yet. To get him started, we used Hoof Freeze on the soles of his feet to help harden and relieve the pain and sensitivity.

We advised Kristen on how to further treat Frankie’s feet, which primarily involved applying Hoof Freeze to parts of the hoof that were chipped or damaged. First, it was important to pick and brush the areas out, and then apply Hoof Freeze.  Care was taken to not let this product run up into the hairline. There also appeared to be deep crevices in his feet in the photos Kristen sent over, and we wanted her to treat them by picking them out, applying Hoof Freeze to help suppress any infection, and then filling the cavities with Sole Pack Packing.  It was important for us to evaluate the hoof to make sure if we used S-Pak, we were not going to be sealing in any infection that could be present in cracks or cavities that weren’t reported to us.

The main problem in Frankie’s case was fighting off infection long enough for the hoof to grow back in a healthy way. The goal was to treat the infected tissue, hopefully kill it, but often these infections have deep, tight cracks and fissure up the hoof wall, making it impossible to treat. We were trying to grow a hoof faster than the infection could spread. We used Sole Pack Hoof dressing on the coronary band and frog to promote fast hoof growth.

Once regrown, a farrier can remove infected tissue to help in the healing process. Thanks to Kristen’s diligence in applying the medications, Frankie slowly but surely started to become more comfortable on his feet. The remaining glue continued to come off, allowing Kristen to treat more and more of the infected tissue.

Happy with the progress Kristen was reporting, in November we recommended a new treatment schedule: after applying Hoof Freeze and Sole Pack for 3-4 days straight, switch to the dressing and packing for 3-4 days straight, then Hoof Freeze again for 3-4 days. The Hoof Freeze can make his feet too hard, which we didn’t want. We advised Kristen to monitor his hooves and if they became too hard, go back to Sole Pack. Sole Pack restores the hoof to its natural state of pliability, adding or taking moisture away, depending on the hoofs needs. Some horses require regular Hoof Freeze applications, whereas others can get by with minimal use.

Closely following our recommendations, Kristen and her trainer felt as though Frankie was a brand new horse by December. His hooves were growing in nicely and he was being worked daily with no signs of sore feet or lameness. By his second trimming, the farrier expressed excitement about the thought of shoeing Frankie in the future – something he never thought he would say.

Kristen’s hard work and determination to see that Frankie’s challenging hoof condition was properly treated had paid off. Within months, she and her sure-footed companion were in the show ring together, making memories and enjoying life.